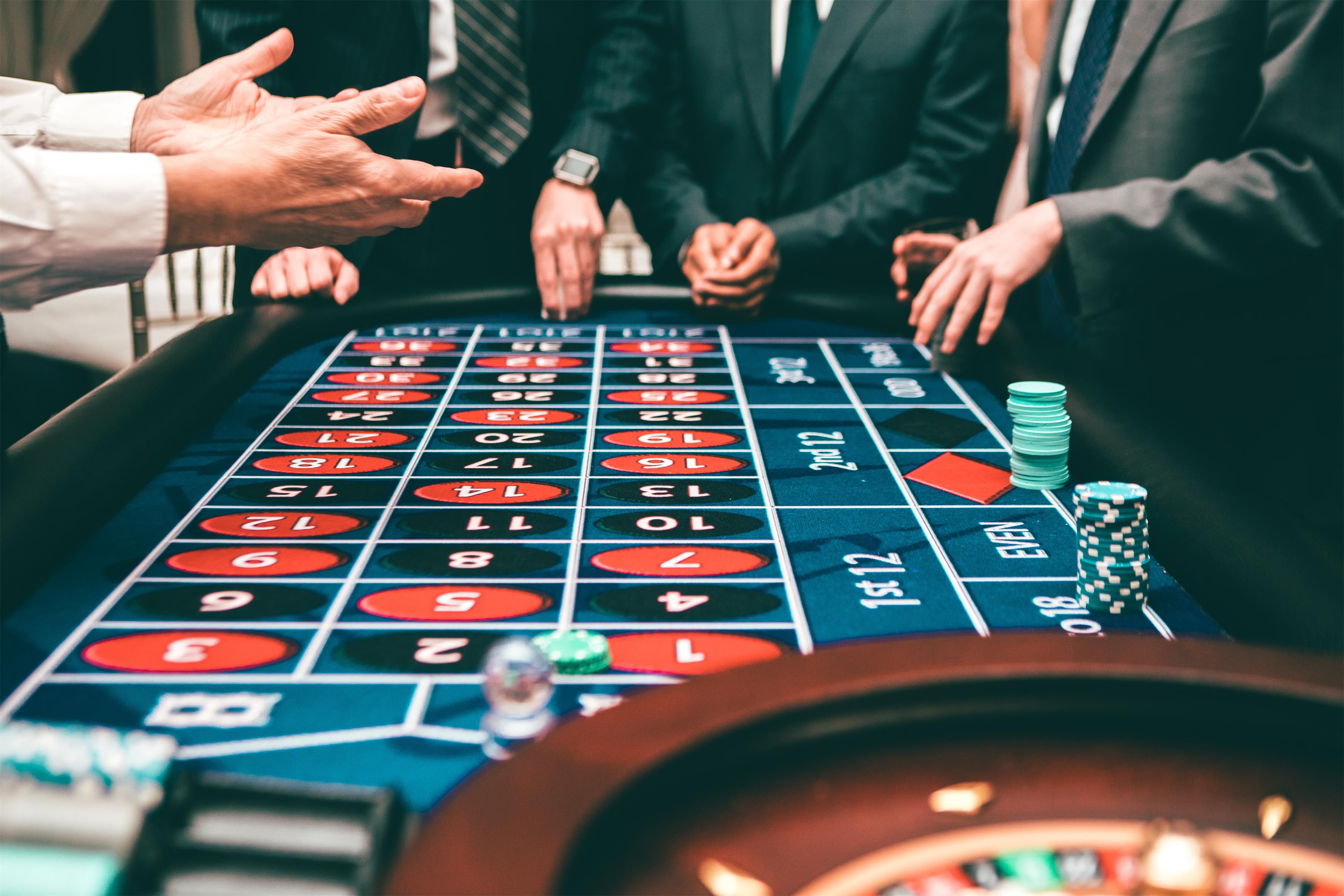 Needless to say, games have had a long history in India. From Chess and Kabaddi to games of dice and cards. Many of us grew up watching our grandparents, and in some cases great grandparents passing their time playing cards with us. We have our epics depicting kings losing and winning everything on a game of dice. It's hard to deny that  gambling has been, it is now and will always be an intrinsic part of Indian culture.

With the advent of internet and gaming apps, now these games are right there in the palm of your hands. And this is where regulation becomes an issue.

Earlier it was limited to the parents or family members making sure that everyone in the family stayed away from the local cigarette or liquor shops. Now everyone in the family from kids to the grandparents have access to their own smartphones and cheap data. With the gradual growth in smartphone penetration closing in at 500 million units1, a KPMG report proclaimed the Indian betting market has ballooned to $130 billion2.

As the market size grows, the increasing cash flow also gets the Government concerned about the legality of the source of funds and whether proper accounting procedures are followed. Hence over a period of many lawsuits, legal discussions and engagements with stake holders, “preponderance of skill” was judged by the Supreme Court of India as the most important factor to influence legality. This resulted in the law governing the gaming industry splitting up into two major groups with their own unique laws governing them. These are:

·  Tradition and their various online forms based on chance

·  Skill based games both social and casual

Majority of these laws were introduced long before India gained its independence and thus do not have sections specifically created for online gambling. Fortunately for us however, gambling is a state subject and thus every state has their own take on it.

Betting and gambling in all its forms is banned in Orissa and Assam along an ordinance prohibiting skill games.

About 14 states/Union Territories follow some form of a Public Gambling Act, 1867 marked in red below： 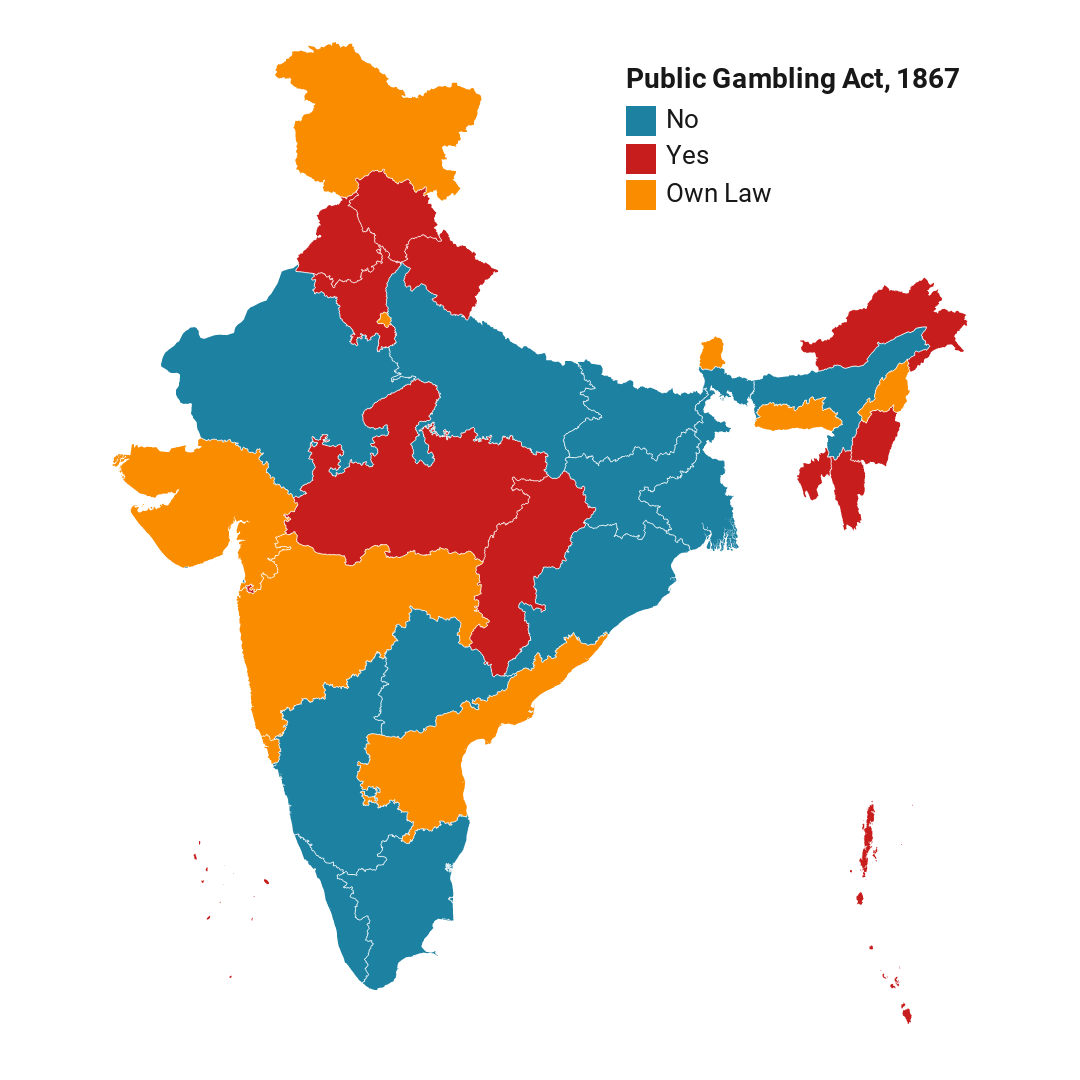 However as visible above, some states have managed to get in on the action and build on these laws. Some have chosen blanket bans while others have decided to modernise them, thus bringing order and tax revenues. The states of Nagaland and Sikkim have proven to be pioneers and have introduced their own specific legislations allowing and regulating online gambling.

Let’s take Sikkim as an example first.On 28th June 2008, Sikkim passed the Sikkim Gambling Law or the Sikkim Online Gaming (Regulation) Act of 2008. This law covers both regulating and managing online gaming both online and offline, while specifying tax structures in the state of Sikkim for such activities. By engaging industry players, further learnings were introduced through the Sikkim Online Gaming (Regulation) Rules on 4th March, 2009 with regular follow up amendments.

However the Sikkim law governs such games to be geo locked within the borders of the state. The laws do grant licenses for national operations for websites like Adda52, Khelo Poker etc, but also land based Casino’s along with Goa.

Then, we head to Nagaland.

The Nagaland Gambling Law or Nagaland Prohibition of Gaming and Promotion and Regulation of Online Games of Skill Rules 2016 is the only state law focused on online games. It prohibits gambling in the state and regulates as well as promotes skill based online games where skill dominates compared to chance despite some aspects of the game including placing bets. Games include card games like solitaire, spades, rummy etc to chess, binary options, Sudoku, chess. Virtual sports games also come under the ambit of this. These games can be offered to the public through apps or other online media, on their websites and television in territories where gambling through games of skill are legal.

How to obtain an online skill based game license

·  The Applicant is a person or entity incorporated in India and has substantial holding and controlling stake in India.

·  The Applicant should not have any criminal record.

·  The controlling stakes and decisions are to be made in India.

·  The Application in the prescribed format is to be submitted along with the application fee of INR 50,000.

Once all the formalities are done post and passed by Director, Nagaland State Lotteries, the license can be granted within 6 months.

All of these companies got licenses for Poker only.

Sachar Gaming Pvt Ltd became the first company to gain the first multi-game license a few months later.4 This being the 6th license granted by the state. This included license for virtual sports fantasy league games, quizzes, poker, auctions, binary options, virtual team selection and the game they specialise in, Rummy. Many other companies have thus applied as well.

The law however still has a long way to go and will require regular engagement between various stakeholders. This is essential so the law can keep pace with the breakneck speed at which online gaming has evolved in India. With such great potential, this industry has been growing fast, attracting investors in India and beyond. This is where the law should regulate and promote the industry and turning it into a contributor to national growth.